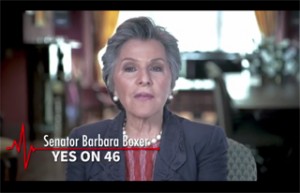 “Preventable medical errors [are] now the third leading cause of death. Only heart disease and cancer take more lives,” said Senator Barbara Boxer in the television ad. “Proposition 46 will save lives with drug and alcohol testing, to make sure impaired doctors don’t treat someone you love, safeguards against prescription drug abuse, and holds the medical industry accountable for mistakes…Let’s save lives, vote yes on 46.” 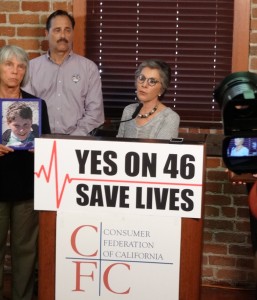 Click here to listen to the audio of the press conference.

Senator Boxer was joined by mothers who told their personal horror stories of losing infants, grade-schoolers and teenagers to medical malpractice. The mothers explained how they have been denied access to justice because the value of their children’s lives under the law has been capped at $250,000 since 1975 and never adjusted.

Jennifer Westhoff spoke about the loss of her daughter who was killed after an avoidable surgery caused cardiac arrest and catastrophic brain damage, and questioned why the opposition has raised over $58 million to oppose Prop 46’s patient safety provisions. Linda Wilkinson spoke about her daughter, Brittany, who had been confined to a wheelchair while fighting a rare disease, who was killed when a doctor failed to realize a critical cranial monitor was disconnected. Sarah Hitchcock-Glover spoke about the pain of losing her son Adam after a routine appendectomy, and harshly criticized the medical insurance industry, which has raised the bulk of the opposition’s warchest against Prop 46, for minimizing her loss. Claire McCormack’s daughter Nora died because doctors failed to realize that her IV nutrition had been disconnected for more than two days; McCormack said that California’s medical malpractice damages cap creates a second tier of medical care for children, women, and the elderly.

The television ad featuring Barbara Boxer includes photographs of the children mentioned above, as well as many other young victims lost to preventable medical negligence.

Also at the press conference was Bob Pack, the author and proponent of Prop 46. Bob Pack lost his two children Troy and Alana when they were killed by a drugged driver high on hundreds of prescription drugs she had doctor-shopped from multiple negligent Kaiser physicians.

Proposition 46, also known as the Troy and Alana Pack Patient Safety Act, will:

Learn more about Proposition 46 and the campaign for patient safety at: www.yeson46.org