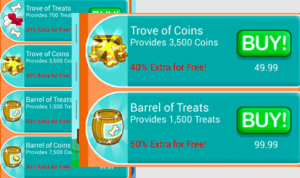 While the folks at Apple have already settled civil and regulatory complaints about in-app purchase policies that allowed children to run up huge bills on their parents’ accounts, the Google Play store has only recently come under scrutiny for its allegedly lax controls. Now, a mom in New York has filed a potential class action against the Internet giant, claiming its policies encourage kids to waste their parents’ money.

The suit [PDF] was filed last week in a federal court in San Francisco by a mother who says that one of her young boys ran up $65.95 in in-app purchases while playing the game Marvel Run Jump Smash on her Samsung Galaxy Tab 2 tablet.

“Prior to the purchase of an App, Google requires account holders to enter their password,” reads the complaint. “However, once the account holder enters the password, he or she (or… his or her minor child) could make purchases for up to 30 minutes without re-entering the password. Thus, a parent could enter his or her password to permit a child to download a free gaming App, and then allow the child to download and play the game. What Google did not tell parents, however, is that their child was then able to purchase Game Currency for 30 minutes without any supervision, oversight or authorization.”

And this is what the plaintiff claims happened in February, when she purchased the Marvel Run Jump Smash game app from the Google Play store, only to find out via a subsequent e-mail that her son had purchased $65.95 worth of “Crystals,” an in-game currency that can be bought in bundles. The mom contends that these purchases were made within the 30-minute window during which the user does not have to re-enter his/her password.

The suit points to Apple’s change in policy, following a Federal Trade Commission investigation that resulted in $32 million worth of refunds to customers. Apple had previously had a 15-minute window during which in-game currency could be purchased without a password, but it has since altered that policy to require a password for each purchase.

Also at issue are the very nature of games that allow for in-app currency purchases. Because Google makes it so easy for users to make these in-game purchases, the plaintiff argues that games and apps are being created primarily for the purpose of enticing consumers to spend money on things like in-game currency.

“Such games, by design, are highly addictive,” reads the complaint. “Google entices the child with a free or inexpensive (e.g., $0.99) download of a gaming platform that then offers the sale of irresistible Game Currency in order to enjoy the game as it was designed to be ‘played.’ Within seconds of “playing” the game, one is led to a screen that sells virtual currency, so that the ‘player’ can ‘build’ things or ‘have’ other virtual things.”

The suit alleges that Google is targeting children and “inducing them to purchase, without the knowledge or authorization of their parents.”

Plaintiffs claim that each purchase made via these apps constitutes an acceptance of Google’s terms of service, and thus a binding contract. However, they contend that under California law, parents have the right to disaffirm certain contracts agreed to by minors.

The complaint also accuses Google of violating that California Consumers Legal Remedies Act by marketing apps as free while allegedly intending “to induce from minors the purchase of Game Currency.”

The company is additionally accused of unjust enrichment for, according to the complaint, knowingly accepting money from in-app purchases made by minors.

The plaintiff seeks class action status for the complaint, along with unspecified damages.