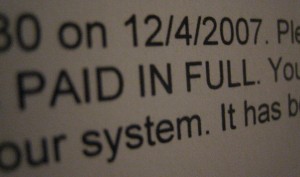 Students who take out private loans to pay for college could face a nasty surprise if their co-signer dies or files for bankruptcy: The lender may suddenly demand the loan be paid in full—or even worse, put that loan in default—even though all payments are being made on time.

The Consumer Financial Protection Bureau issued a consumer advisory on Tuesday, warning borrowers that these “auto-default” clauses may be in their loan agreements and serious financial consequences could result.

“This is something that is deep in the fine print, so it is certainly a surprise to many,” said Rohit Chopra, the agency’s student loan ombudsman. “Parents and grandparents want to help their children or grandchildren pay for school, and the last thing they want is for them to be made worse off because of their own financial distress or death.”

The default can happen automatically, without any notice or request for payment in full. That default is quickly reported to the credit bureaus and can seriously hurt the former student’s credit profile. It can make it harder to buy a home, start a small business or get a new job.

Most private loans require a co-signer because the student doesn’t have the credit to qualify. The bureau says more than 90 percent of new private loans were co-signed in 2011, up from 67 percent in 2008.

Federal student loans rarely require a co-signer and even when they do, there is no auto-default penalty. Private loans tend to have higher interest rates and fewer protections than federal loans.

You need to read the promissory note to check to see if it has an auto-default clause. If it does and you’ve been making all of your payments on time, ask the lender to release your co-signer. The bureau has instructions and a sample letter you can use.

Many lenders advertise this release option for their private student loans, but Chopra said borrowers often “have to jump through hoops” to get that release.

Mark Kantrowitz, a financial aid expert, said lenders fear that if they give you that release, you might decide to stop paying. They want to know that you’re a good risk without a co-signer and they look for predictors of future default, such paying during the grace period, but after the due date.

“The way to maximize your chances of getting that release is to make the payments on time,” said Kantrowitz, publisher of Edvisors Network, a group of websites about planning and paying for college. “Either use automatic debit or mail the payment at least a week in advance of the due date.”

Should your request for that release be denied, your only option is to refinance the loan, if possible, to get one without a default clause.

The consumer protection bureau also released a report on Tuesday that’s based on the analysis of more than 2,300 private student loan complaints and more than 1,300 student debt collection complaints received by the agency during the previous six months.

The report indicates that these auto default clauses are being used by several major lenders, although it did not specify which ones.

How often are these clauses being invoked? The bureau said it does not know, but Chopra said the agency is concerned that with an aging population and very long terms on some private student loans, this could “spiral out of control.”

The report does not suggest anything illegal is being done and it does not suggest the need for any new regulations. But it’s clear the agency believes lenders could be more transparent and more helpful with their customers.

“Lenders should have clear and accessible processes in place to enable borrowers to release cosigners from loans,” bureau Director Richard Cordray said in a statement. “A borrower should not have to go through an obstacle course.”

America’s largest private student loan lender, Sallie Mae, told CNBC via email that when a co-signer dies, the customer automatically continues as the sole individual on the loan with the same terms. If the borrower is creditworthy and has made payments for the past 24 months on time, or is on active military duty, no additional action is taken. In other cases, they may file a claim with the deceased co-signer’s estate. Sallie Mae said its promissory note does say that the loan may be declared in default and due and payable in the event of the cosigner’s death, but they do not report the loan to the credit bureaus as defaulted unless and until it reaches 211 days of delinquency.

Wells Fargo, the country’s second-largest issuer of private student loans, said the bank does not accelerate debt repayment on the student customer when the co-signer dies or files bankruptcy.

Kantrowitz recommends contacting the lender. He said this process is often automated, based on death records and court filings.

“Call the lender and talk to a human being,” he said. “Explain that you’ve been making the payments on time and it doesn’t make sense to treat this as a default because that will turn a good loan into a bad loan.”

If that doesn’t work, file a complaint with the Consumer Financial Protection Bureau. The agency may be able to advise you on how to proceed.