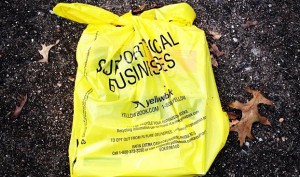 By now, you’re probably thinking you have no privacy left.

To cite just a couple of prominent recent examples, we had Target and other retailers admitting in January that hackers may have accessed the credit and debit card numbers of more than 110 million people.

Last week, we all took a crash course in Heartbleed, the security software flaw that may have quietly jeopardized the personal information of just about every Internet user for the last two years.

Amid these ongoing privacy breaches, you’d think all businesses would be doing everything possible to help customers protect themselves.

All, that is, except the phone companies.

David McDonald, 65, of Arroyo Grande is among millions of AT&T customers who now have to pay $1.75 a month for the privilege of an unlisted phone number. The company raised the fee in January from $1.25 — a 40% increase.

Before California regulators, in their infinite wisdom, gave the phone companies free rein in 2006 to jack up such fees, AT&T charged 28 cents for customers to keep their numbers out of the phone book and online directories. The company’s charge has risen 525% since then.

Verizon Communication’s unlisted-number fee is even more insane — if you can figure out what it is. More on that in a moment.

And let’s emphasize: This is for a service that a phone company is not providing. It’s for them not including your name in a directory and not facing the costs of printing it in a phone book.

“It’s pure gravy,” said Natalie Billingsley, telecom supervisor for the Office of Ratepayer Advocates, an arm of the state Public Utilities Commission. “They charge whatever they want to charge.”

McDonald has a very good reason to keep his home number to himself. As a former California prison guard, he wants to make it as difficult as possible for erstwhile business acquaintances, shall we say, to find him.

It’s a question I’ve been repeating for years. It’s not as if it costs AT&T or any other phone company anything to specify that a particular number isn’t to be publicly listed. In the computer age, we’re talking about a keystroke or two.

Moreover, the idea that this would be a recurring charge is absurd. Do the phone companies have to re-enter your preference every 30 days?

Dan Conway, an AT&T spokesman, said privacy-minded customers can choose to omit their address from directory listings or just use their first initial with their last name. There’s no cost for these preferences, he said.

But for an unlisted number, Conway said, there are “special handling procedures” that require an “administrative charge.”

I asked why that charge is now $1.75 when it costs AT&T little or nothing to provide this service. Conway declined to comment.

I asked why customers have to keep repaying the charge every month. No comment.

I made three calls to Verizon to pin down that company’s unlisted-number fee, and was told different amounts by three service reps.

The third said it would cost $2.25 a month to be unlisted if I have basic phone service, but $4.50 if I have a Verizon FiOS broadband connection. He was unable to say why a FiOS customer has to pay more for privacy.

Jarryd Gonzales, a Verizon spokesman, insisted that the unlisted-number fee is $2.25 a month for all customers. He couldn’t explain why service reps were saying otherwise.

The rationale for the unlisted-number fee, Gonzales said, is to cover “the costs to help support the ongoing database management, IT systems updates and collaboration with directory publishers.”

Like AT&T’s Conway, he declined to comment when I asked why the fee is so high, why it recurs each month or why there’s a charge for privacy.

Just for the fun of it, I called Verizon customer service a fourth time after hearing from Gonzales, and was told that an unlisted number costs $4 a month.

Either the company’s spokesman is woefully misinformed or its customer service department has some serious problems to deal with.

In any case, AT&T and Verizon don’t bother defending this fee in any meaningful way, because it’s indefensible.

There’s no rational argument they can make for what is in fact a privacy premium. In this day and age, with people’s privacy constantly under siege, that’s tantamount to an abusive business practice.

The unbelievably useless state PUC has shown itself unwilling to protect consumers’ privacy. It’s therefore up to lawmakers to fulfill their role as guardians of public safety.

A nominal one-time fee to establish your preference regarding an unlisted number? Maybe. A recurring fee? That’s nothing more than a money grab by companies that already pocket billions of dollars a year in profit.

Privacy shouldn’t come at an extra cost, especially from companies that publicly pat themselves on the back for taking customers’ privacy very seriously.

Or Verizon’s own mandate: “At Verizon, we are committed to maintaining strong and meaningful privacy protections for customers.”

Each company’s unlisted-number fee belies this lofty sentiment and demonstrates the true commitment — exploiting customers’ desire for privacy as an opportunity to rake in even more cash.

I asked McDonald why he thinks he has to pay $21 a year to AT&T for an unlisted number.

“Because they can get away with it,” he replied.