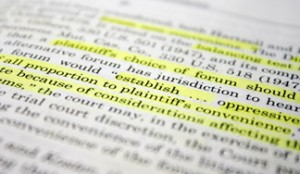 Customers who have disputes with banks or credit card companies often can be forced to go to arbitration before a private lawyer to try to resolve the problem, rather than before a judge in court.

That’s because many financial accounts come with built-in contracts containing “pre-dispute” arbitration clauses — so-called because consumers agree to them when they sign up for the account, before they actually have a disagreement.

The federal Consumer Financial Protection Bureau on Tuesday released a study critical of such arbitration clauses, and suggested the agency may weigh new rules to limit them. The agency found that the clauses restrict consumers’ ability to file class-action lawsuits, in which many people with similar complaints file suit as a group, instead of individually. Tens of millions of consumers are subject to such contracts, which hamper their ability to seek financial redress, the agency found.