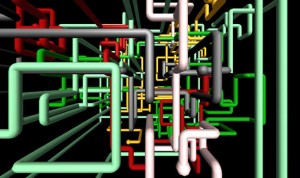 There’s been a fairly loud public outcry at the news that the Federal Communication Commission is proposing new “net neutrality” rules. The big concern: Under the proposal, first reported by the Wall Street Journal, Internet service providers (ISPs) will be allowed to give preferential treatment to traffic from companies that are willing and able to pay a premium for that top-tier service. So, for example, you may get smoother, better-looking videos from Netflix and YouTube than from their competitors because they paid for their content for faster, more reliable delivery to your home.

That seems to fly in the face of the basic tenet of net neutrality, which is that all data traveling over the Internet gets treated equally. Under the proposed plan, ISPs would have to offer a baseline—or minimum—level of service to their subscribers, but can reach special deals with content companies for preferential treatment on the “last mile” of broadband networks that connect to consumers’ homes.

Our feeling is that by basically creating a “fast lane” for those companies that can afford it—like the Internet equivalent of a high-speed HOV lane for rush-hour commuters willing and able pay the toll—the FCC is potentially creating a two-tiered system that favors larger players, stifling innovation by start-ups and smaller players who can’t afford to pay extra.

“This plan doesn’t bode well for consumers,” says Delara Derakhshani, policy counsel for Consumers Union. “The FCC appears to have abandoned the principle that all websites and services should be treated equally on the Internet.  This move is likely to favor the companies with the deepest pockets and hurt the scrappy start-ups.  It could create a tiered Internet where consumers either pay more for content and speed, or get left behind with fewer choices.”

“It’s more than disappointing that the FCC is not embracing the best option for achieving net neutrality, which is reclassifying Internet service as a telecommunications service,” Derakhshani continues.  “The details of this plan are still coming to the surface. We are going to review the proposal and push hard for final rules that ensure an open Internet.”
FCC: Net neutrailty isn’t dead

Not surprisingly, the FCC is ardently defending the proposal, with FCC Chairman Tom Wheeler calling reports that the new rules undermine the precepts of net neutrality “flat-out wrong.” Under the proposal, ISPs will have to offer fast-lane arrangements to everyone on “commercially reasonable” terms, and companies will be prohibited from discriminating against or blocking online traffic from those content providers who don’t pay the premium. The proposal also calls for more detailed reporting by ISPs to prevent anti-competitive practices.

Our feeling is that the phrase “commercially reasonable” is just too vague to be either meaningful or enforceable, and the FCC’s case-by-case determination about whether terms are reasonable could result in arbitrary decisions.

We also worry that the cost of some online services may increase as companies look to pass along their high-speed toll to consumers. Also, the plan could impede innovation by smaller companies and start-ups, as it seems to favor established, better-funded companies that can afford to pay for faster lanes into the home. This is especially true of companies developing services such as games and streaming video that require a consistently high quality of service.

And if you’re paying a premium to your ISP for an upgraded broadband package, you may enjoy the faster speeds only when using those services from companies that are paying for priority access to your home.

We’ll know more about the FCC’s plans in a few weeks. The commission as a whole is now reviewing the proposed rule ahead of a vote on May 15th. If it’s approved, then the proposal will be opened up for public comment.

The FCC’s efforts to once again address the issue of an open Internet is largely a result of a decision earlier this year by a federal appeals court, which struck down the agency’s rules requiring all Internet traffic to be treated equally. The court basically said that since the FCC had explicitly decided not to classify broadband as a common carrier like a telecom service, it lacked the regulatory authority to treat them as such.

Consumers Union and a number of other public interest groups have asked that the FCC reclassify broadband as a telecom service, which would make it subject to greater oversight.