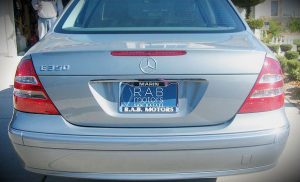 The bill aimed to stop toll-road cheats and ensure law enforcement officers can identify vehicles on the road. California currently requires only a small notice of sale, which can’t be read or photographed from a distance, to be displayed on a vehicle while the owner is waiting for permanent plates.

The bill, AB516 by Assemblyman Kevin Mullin (D-South San Francisco), will require car dealers to put a temporary plate on a vehicle when they sell it, beginning in 2019. Altering the expiration date would be a crime, with an option for prosecutors to decide whether to charge as a misdemeanor or felony.

Read more at the LA Times…