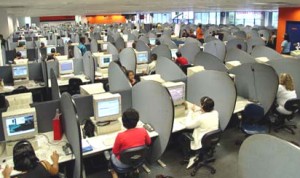 While the person who calls you to ask for a charitable donation is probably representing a non-profit organization, that telemarketer may be employed by a for-profit fundraising company hired by the charity. But just how much of what you’re giving ends up going to the charity, and how much goes to line the telemarketer’s pockets?

New York state Attorney General Eric T. Schneiderman has issued a report [PDF] that looked at the ultimate destination of the money raised by telemarketers for legitimate charities in the state.

The report found that those telemarketing companies registered in New York brought in nearly $250 million in donations in 2012, the largest amount ever recorded by the AG’s office.

But Schneiderman claims that only 38% of those donations actually went to the charitable organizations, with telemarketers keeping an average of $.62 of every donated dollar. In half of the telemarketing campaigns in the report, the telemarketers received more than 70% of the funds raised.

Amazingly, in 91 of the 589 telemarketing campaigns (15.4%) in the study, the telemarketing fundraisers were paid more money than they brought in. Meanwhile, fewer than 10% of all fundraising campaigns resulted in the charity receiving at least 60% of the donations.

The previous report from the NY AG’s office on telemarketing fundraising resulted in multiple investigations into campaigns and fundraisers where only a small fraction of donated money was handed over to charities. Those investigations have thus far resulted in the closure of three charities and one fundraising business. Schneiderman says that this latest report will likely bring about further inquiries.

The AG’s office provides the following suggestions for dealing with a telemarketing fundraiser:

Resist Pressure To Give On The Spot. If you receive a call from a telemarketer, do not feel pressured to give over the phone. You can ask to receive information about the cause and a solicitation by mail.

Ask How Your Donation Will Be Used. Ask specifically how the charity plans to use your donation, including the services and organizations your donation will support. Avoid charities that make emotional appeals and are vague in answering your questions. Be wary if an organization will not provide written information about its charitable programs and finances upon request. Any legitimate organization will be glad to send you this information.

Look Up Charities. Review information about the charity before you give. In New York, people can use this page on the Attorney General’s website to search for information about charities and fundraising companies.

Each state should have similar information available to consumers. The National Association of State Charity Officials has contact information for the correct regulators in each state available on its website.

Your state office also can verify how much of your donation goes to the charity, and how much goes to fundraising and management expenses.

You also can check out charities with the Better Business Bureau’s Wise Giving Alliance and GuideStar.

Give To Established Charities. Donate to organizations you are familiar with or ones with a verifiable record of success in meeting their charitable missions. Closely examine charities with names similar to more established organizations.

Never Give Cash. It’s best to give your contribution by check made payable directly to the charity. This is safer than giving by credit or debit card and far safer than sending cash. Be careful about disclosing personal or financial information; never give out such information to an organization or individual you don’t know.

Report Suspicious Organizations. If you believe an organization is misrepresenting its work, or that a scam is taking place, contact your state’s Attorney General’s office.