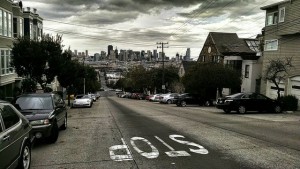 An Uber driver who offered to take a passenger in San Francisco to a place where he could obtain narcotics and prostitutes allegedly chased down and violently robbed the passenger early Saturday morning, a police spokesman said Monday.

The 30-year-old victim told police he was in the city’s Marina District at a bar on Chestnut Street around 1 a.m. Saturday when he decided to go home and requested an Uber ride via the ride-booking service’s app on his cellphone, according to San Francisco police spokesman Albie Esparza.

A man driving a black town car arrived to pick him up and the passenger entered the car, police said.

The Uber driver, described as a man between 25 and 30 years old, allegedly offered to take the passenger to a place where he could solicit drugs and prostitutes.

The passenger declined the offer and the driver continued toward the passenger’s requested destination in the South Beach neighborhood, near the intersection of The Embarcadero and Brannan Street, Esparza said.

However, at Delancey and Brannan streets, about a block away from the passenger’s destination, the driver stopped the car and picked up a woman in a dress, described as between 25 and 30 years old, police said.

Esparza said the passenger had not requested an UberPool, an option that allows passengers to carpool and share rides with other passengers for a discounted price.

The passenger told the driver he would like to get out of the car but the driver refused to stop and continued driving.

At Pier 30, just past the passenger’s requested destination, the passenger managed to open the car door and attempted to run away, but the driver allegedly chased after him on foot, police said.

When the driver caught up to the passenger, he kicked him and then robbed him of his cellphone and debit card, police said.

The suspect took off following the alleged robbery.

Esparza said the victim took himself to a hospital for treatment of a dislocated knee and reported the assault and robbery to police.

The suspect had not been arrested as of this morning, according to Esparza.

Esparza said there were a number of unauthorized transactions on the victim’s debit card.

Investigators are working to determine the identity and whereabouts of both the Uber driver and the female passenger, Esparza said.

“We are gathering more information, and have reached out to the San Francisco Police Department to offer assistance.”