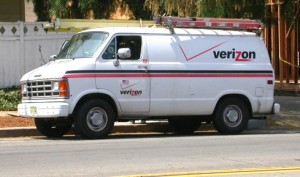 The 2012 law was essential to the creation of high-tech products and services, the industry argued. Its proposal bowled over opposition from consumer advocates.

But this deregulation was never supposed to affect phone customers who didn’t want to give up their traditional copper-wire land lines, the bill’s author, Sen. Alex Padilla (D-Pacoima), insisted during the debate.

What’s more, the law also authorized the Public Utilities Commission to ensure ratepayers have a right to basic, universal service. It also expressly banned phone providers from forcing people to give up their copper-line phones.

Now, complaints are mounting that at least one telecom, Verizon Communications Inc., is doing just that. The company is accused of forcing sometimes unwitting Southern California customers to switch from copper lines to voice-over-Internet connections.

An investigation by the Utility Reform Network, known as TURN, culled the files at the PUC’s consumer bureau and found 32 complaints from ratepayers that Verizon doesn’t maintain its copper network and is pushing households to reportedly less-reliable Internet phones.

TURN has filed an emergency motion asking the PUC to look into and take action on the complaints.

Padilla said he was surprised by TURN’s request because the commission had repeatedly told him that it didn’t have any consumer complaints.

“This raises concerns at my end,” the senator said. “If somebody is violating the law, there should be consequences.”

Indeed, just last week, PUC President Michael Peevey told Padilla he “had no evidence … of anything going on.”

The tech industry’s considerable lobbying effort at the Capitol just got some added strength. The Internet Assn., a Washington trade group representing Amazon.com, Facebook, Google and other firms, has opened an office just across the street from the statehouse.

“The Internet Assn. is putting boots on the ground in Sacramento and stands ready to assist California legislators who are on the front lines of the knowledge economy’s impact on government and society,” said Chief Executive Michael Beckerman.

The new group — along with similar lobbyists such as TechNet, TechAmerica and the Silicon Valley Leadership Group — plan to weigh in on a range of issues, such as privacy and intellectual property.