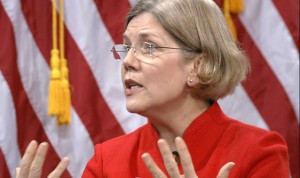 In her new book, “A Fighting Chance,” Massachusetts Sen. Elizabeth Warren accuses California gubernatorial candidate Neel Kashkari of lying to her when he led the taxpayer-funded federal bank bailout.

Warren, a Democrat, served as chair of the bipartisan Congressional Oversight Panel that was created in 2008 to scrutinize the $700-billion Troubled Assets Relief Program. In her book, released Tuesday, Warren writes that members of the panel had grown “deeply concerned” that within seven weeks of the law’s passage, $172 billion in taxpayer funds had been committed to various banks with little oversight.

On Nov. 21, 2008, a Friday, the panel met for the first time with Treasury Department officials. Treasury Secretary Henry Paulson was not available, so they met with Kashkari, who then was an assistant treasury secretary charged with leading the bailout.

“We pressed him on the status of the big financial institutions: Did Treasury anticipate additional bailout assistance to the giant banks? Could we see the terms of the arrangements that had been worked out so far? Kashkari objected to the word bailout, so we wrangled about that for a couple of minutes,” Warren wrote. “But he was very clear on one point: The big cash injections were done, and Treasury would now concentrate on getting assistance to smaller banks.”

Within 48 hours, news broke that Citibank, which had already received $25 billion, would receive an additional $20 billion, and a $306-billion taxpayer guarantee, she wrote.

“At the same time we were receiving reassurances from the head of TARP that the big bailouts were finished, his colleagues were down the hall negotiating this gargantuan deal to bail out Citibank for a second time,” Warren wrote. “I was stunned – and furious…. Our panel hadn’t even had our first organizational meeting, but whatever vision I’d had of cooperation and candor had vanished.”

Kashkari, a GOP candidate for California governor, has staked his bid on his experience running TARP.

Warren’s book, which covers her upbringing, her family’s economic struggles and her road to the U.S. Senate, has stoked questions of whether she will mount a bid for the White House in 2016 as a more liberal alternative to potential Democratic candidate Hillary Clinton. Warren has repeatedly said she is not running for president in 2016.