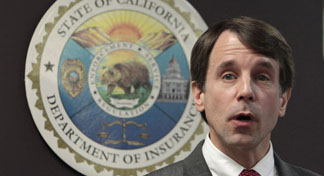 “We have heard from Californians time and time again about how painful it is to pay these rate increases,” Jones said. “Unfortunately, neither federal nor state law provides the authority to reject excessive health insurance rates.”

Jones and consumer advocates are backing a November ballot measure that would change that. The initiative would give the state insurance commissioner the authority to deny unreasonable rate hikes for health coverage.

Opponents of the ballot measure, including insurers, doctors, hospitals and business groups, say it would create a costly new bureaucracy and that it doesn’t address the underlying reasons for rising premiums.

Blue Shield, while disputing some of the state’s figures, said the 10% increase reflects the rising cost of medical care for these customers in addition to new taxes and fees.

A company spokesman also said Blue Shield’s pledge to limit its net income to 2% of revenue means “higher rates do not result in higher income.”

Jones said his office determined that a 4% average rate increase was reasonable. That would have saved these the affected customers $10 million in annual premiums, he said, but the San Francisco insurer rejected the request.

State regulators found that Blue Shield’s administrative costs were too high and that it was overstating what it expects to pay for future medical claims.

Blue Shield said the cost of medical care for the affected policyholders is climbing more than 11%. Those customers are in grandfathered policies, which were in place before March 2010 and are not subject to all of the provisions of the Affordable Care Act.

About 1 million California health-insurance customers received cancellation notices late last year because their individual policies were subject to the healthcare law but didn’t comply fully with it.