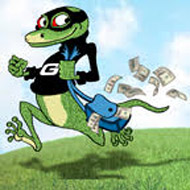 If you’re an unmarried, uninsured good driver and have anything less than a bachelor’s degree or a professional job, GEICO quotes you coverages it claims are its “Lowest Limits” that are in fact as much as 1000% more than the minimum it must offer under state law, the Consumer Federation of California (CFC) charged in a petition it filed with the California Department of Insurance.

Having uncovered this scheme, CFC is calling on the Department of Insurance to enforce state insurance and civil rights laws by ordering GEICO to halt these practices and impose penalties, which may include fines and revocation of the company’s license to sell auto insurance.

It’s nearly impossible to watch TV and not be bombarded by ads featuring a gecko, a pig or other GEICO mascots urging a visit to the company’s website for an interactive rate quote. However, CFC’s extensive testing of the company’s online rate quote system revealed that the message “Geico – 15 minutes could save you 15% or more” belies a reality of quotes as much as 50% higher than are lawful for unmarried consumers who are not already insured and have lower educational attainment and job status.

When a good driver living in California fills in the online tool on GEICO’s website, and tells the company that he or she is unmarried, and does not have a college degree, and is currently uninsured, and is unemployed or not working in a professional or executive job, the company website presents a rate quote for six months’ coverage that it labels as the “Lowest Limits” it offers: $100,000 for a single injury, $300,000 for injury to more than one person, and $50,000 for property damage, called a “100/300/50 policy” in CFC’s petition.

If that person is a professional or executive, or married, or a college graduate, or has current insurance coverage, GEICO’s website produces a “Lowest Limits” quote for one month’s coverage including $15,000 for a single injury, $30,000 for injury to more than one person, and $25,000 for property damage, called a “15/30/25 policy” in CFC’s petition. CFC alleges that the representation of $25,000 as “Lowest Limits” for these good-driver quotes is a separate violation of California insurance law.

The resulting premium quotes range from 40% to 54% higher, and are $75 to $132 more costly for six months’ coverage for a 14-year-old compact car than the quote an otherwise identical driver would receive if that driver were married, or a college graduate, or in a higher-income occupation, or currently insured. The quotes CFC obtained on the GEICO website were for a 2000 Honda Civic.

Targeted motorists either pay for excessive coverages they are falsely told are the lowest available, or GEICO drives them away with these costly quotes. Either way, GEICO is breaking California’s insurance regulations and civil rights law, CFC alleges.

Compounding the misrepresentation of “Lowest Limits,” GEICO quotes these targeted consumers a six-month premium payment amount. All other good drivers are quoted a one-month payment amount. As a result of this disparate presentation, targeted drivers see in big, bold font a payment amount as much as 900% higher than the payment amount GEICO shows to an identical college grad, married, insured, or upper-income occupation driver.

State insurance regulations do not permit use of education, occupation, or prior insurance as “rating factors,” and therefore an insurer should not require a potential customer to furnish this information before it provides a rate quote, the CFC charges in additional allegations. An insurer may use marital status in setting rates – but not to mislead unmarried drivers about minimum coverage amounts.

“A single woman living in Fresno with a perfect driving record, who works as a vice president in a private company and has no prior insurance, will be offered a “Lowest Limits” quote on GEICO’s website for a 15/30/25 policy at $162.18 for a six month period ($324.36 per year). If that same woman indicates on GEICO’s website that she instead works as a cashier, she will be offered a 100/300/50 policy, described as a “Lowest Limits” policy, for $289.68 over six months ($579.36 per year) – a 54 percent difference in price.” The same switch in online rate quotes occurs if the driver changes educational attainment from college graduate to high school graduate, or from married to unmarried, or from insured to uninsured.

GEICO is the nation’s second-largest auto insurer. In California, it is the sixth largest, with one million auto policyholders who pay over one billion dollars per year for their coverage.

The company is subject to fines of $5,000 to $10,000 for each violation, which could number into the millions, given the company’s relentless marketing of its online quotes. CFC is also asking Insurance Commissioner Dave Jones to consider suspending or revoking GEICO’s license to sell auto insurance in California.

California voters enacted strong policyholder protections under Proposition 103 in 1988. GEICO deceives vulnerable consumers by telling them that coverage levels ten times higher than the state requires are the lowest options available. CFC believes that GEICO should pay stiff penalties and be prohibited from selling its product in the state.

If you are a California resident and you are a GEICO customer or you got an online rate quote from GEICO, we would like to learn more about your experience. Please contact us here. All inquiries are strictly confidential.