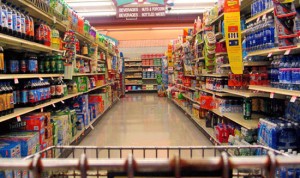 The experts all agree on one thing: It began with coffee.

Coffee, says Edgar Dworsky, founder of Consumerworld.org and a former assistant attorney general in the state Consumer Protection Division, is “the classic example” of an insidious trend that has spread through every aisle of the grocery store: package downsizing.

Many years ago, dear children, a 1-pound can of coffee contained 1 pound of coffee. Today, that can probably holds something like 11 ounces. A pound of hot dogs? At least one brand is down to 14 ounces. A ½-gallon of ice cream? Gone the way of the dodo, replaced by the 1½-quart container. A bag of sugar, weighing 5 pounds since time immemorial, is now 4 pounds.

As anyone who has set foot in a supermarket in the past couple of years can tell you, food prices are up — way up. To some extent, food manufacturers are facing the same challenges as consumers: Raw materials are more expensive, transportation costs higher, resources scarcer. “The reality is,” says Phil Lempert, editor of SupermarketGuru.com, “if you look at USDA projections, food is going to get more expensive. And as a result, food companies are going to do one of two or three things: Raise prices and keep packages the same, or reduce the quantity in the package. Or do a little of both.”

Consumers might be willing to swallow, albeit reluctantly, either higher prices or smaller packages (which in the end amount to the same thing). What many find objectionable is the seemingly deceptive, or at least sneaky, way that manufacturers go about downsizing. “Nobody begrudges the company making money,” says Rosemarie Lauria, of Braintree, a consumer who’s tired of seeing toilet paper and cookies shrinking at the store. “But the key word is ‘deceive.’ I find it underhanded. I would rather they were upfront about it and raised the price. Don’t they know we’re watching?”

“The whole transparency issue,” Lempert agrees, “is what people get upset about.” The shrinkage can also aggravate cooks who are using recipes that call for a certain size can or package — and find that size is no longer available. If your brownie recipe calls for 5 ounces of unsweetened chocolate, you’re out of luck; a package of Baker’s unsweetened chocolate went from 8 ounces to 4 last year. The price per package went down a bit, but the price per ounce — surprise! — went up.

Dworsky has been tracking shrinking product sizes for years. The latest example to raise his ire is Chobani Greek yogurt, the ubiquitous little cups that have swept the category by storm. In December, those cups got a little littler: The 6-ounce cup shrank to 5.3 ounces. It might not sound like much of a difference, but as Dworsky points out, it’s about 10 percent less product.

Peter McGuinness, Chobani’s chief marketing and brand officer, is adamant that the downsizing of the package had nothing to do with price or profits. “It is the established category norm; everyone is at 5.3 ounces,” he says. The larger size, he says, was creating consumer confusion, and that’s what drove the change: “Many of our consumers were confused at the shelf when comparing nutritional information. Many have sent messages clearly to us saying, ‘Why do you have more sugar and calories?’ We wanted to level the playing field so they were comparing apples to apples, yogurt to yogurt.”

Brian Kennedy, a spokesman for the food industry trade group Grocery Manufacturers Association, refused repeated requests for an interview. In an e-mail statement, he wrote that if increasing costs faced by manufacturers “remain high for a protracted period of time, inevitably consumers will see the impact at retail in a variety of ways. . . . Each company makes its own decisions how to adjust and accommodate.”

The list of companies that choose to accommodate by shrinking package sizes is lengthy and only getting more so. Dworsky’s website features dozens of examples, from chips to peanut butter to mayonnaise. Consumerist.com, a website run by a subsidiary of Consumer Reports, features an ongoing compilation of products hit by what it calls “grocery shrink ray.”

“Nobody begrudges the company making money. But the key word is ‘deceive.’ I find it underhanded. I would rather they were upfront about it and raised the price. Don’t they know we’re watching?” said Rosemarie Lauria, Braintree shopper, who is tired of seeing packages of everything from toilet paper to cookies shrinking at the store.

Manufacturers have become particularly adept at concealing package shrinkage, says John Gourville, a marketing professor at Harvard Business School. “If you think about how you see products, they have height, width, and depth. If you want to shrink a package without making it noticeable, you keep the height and width the same and shrink the depth. On the shelf, it looks the same as always,” he says. Other common techniques include deepening an indent in the bottom of a beverage bottle or retaining a package’s size but including less product.

Because it isn’t always easy to spot a shrunken product, Dworsky says “you have to become net-weight conscious, not just price-conscious, and look at unit pricing” when shopping. Once you realize your old favorites have been downsized, you have a few options. “You can go to the store brand. Or you can write to the manufacturer, and you’ll get an answer that has a PR spin, and maybe some coupons for free products,” says Dworsky. Look for brands within a category that remain unshrunken. Häagen-Dazs downsized its “pint” to 14 ounces a few years back, while Ben & Jerry’s, as it proudly declares on the lid, is “still a pint.”

Lempert suggests thinking outside the supermarket. “You can go to a warehouse club, or to dollar store or drug chains, where you can find maybe older packages or cheaper prices.” He encourages consumers to do more cooking: “You don’t have to buy pasta sauce; you can buy crushed tomatoes for about a buck, make your own sauce, and save a fortune.”

For those who are buying pasta sauce and much more, the incredible shrinking package is here to stay.

“Unfortunately, it’s a way of life for shoppers these days,” says Dworsky. “But they need to be aware of it and monitor it. . . . Manufacturers are out to fool us if they can get away with it.”