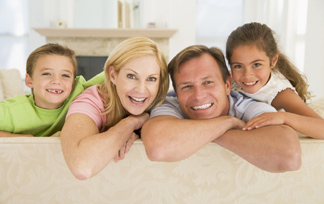 For decades, U.S. manufacturers have filled upholstered furniture with pounds of toxic chemicals to comply with a flammability standard set by a single state, California.

The obscure rule, known as Technical Bulletin 117, brought flame retardants into homes across the country. American babies came to be born with the highest recorded average concentrations of the chemicals among any infants in the world.

But on Thursday, California threw out the 38-year-old rule and approved a new one that furniture manufacturers can meet without using flame retardants.

The updated rule does not ban the chemicals. However, manufacturers have said they expect to stop adding them to furniture foam, holding out hope that consumers soon can start shopping for couches and other upholstered furniture free of flame retardants linked to cancer, developmental problems, reduced IQ and impaired fertility.

California Gov. Jerry Brown moved to scrap the old rule after a Tribune investigative series documented how the chemical and tobacco industries waged a deceptive campaign to promote the use of flame retardants, even though government and independent research shows the chemicals do not provide meaningful protection from furniture fires.

The new standard, to be phased in during 12 months beginning Jan. 1, requires upholstery fabric to resist a smoldering cigarette — the biggest cause of furniture fires. It is modeled in part after a voluntary standard adopted by the furniture industry and a national smolder standard proposed by the U.S. Consumer Product Safety Commission, which has found that specially designed furniture fabric is far more effective at preventing fires than adding flame retardants to the foam underneath.

Brown’s support proved to be crucial in a long campaign by scientists and public health advocates to get toxic flame retardants out of furniture. The changes also apply to baby products, some of which have been made with flame retardants despite little evidence they pose a fire hazard.

“There’s going to be less flame retardants in furniture, in dust and in us,” said Arlene Blum, a University of California at Berkeley chemist who has drawn attention to health risks posed by the toxic compounds. “It’s great for everyone’s health.”

Tonya Blood, chief of the state agency in charge of enforcing the rule, said she is confident the changes will have a significant impact. “Many manufacturers have stated that they will be removing flame retardants from their furniture,” she said Thursday after Brown announced approval of the new standards.

A top official for the American Home Furnishings Alliance, an industry trade group, has said most companies can comply within a month after the changes take effect, though compliance isn’t mandatory until Jan. 1, 2015. Retailers will be allowed to sell inventories of products that could still contain flame retardants.

Bob Luedeka, executive director of the Polyurethane Foam Association, said the furniture foam industry will be able to meet the new standard quickly. He predicted consumers will start seeing furniture made without flame retardants in stores in about six months and does not expect any change in retail prices.

Since 1975, California has required the foam cushions in upholstered furniture to withstand a candlelike flame for 12 seconds, a standard manufacturers met nationwide by adding flame retardants.

When lawmakers considered eliminating the candle test, the chemical industry’s star witness, burn surgeon David Heimbach, testified about babies who burned to death in fires started by candles. But the Tribune series showed that the babies he described didn’t exist.

The newspaper also documented that the group sponsoring Heimbach — the Citizens for Fire Safety Institute — was a front group for the three largest manufacturers of flame retardants. The industry has since shut down that group.

An arm of the American Chemistry Council, the chief trade group for the chemical industry, said the changes to California’s flammability standard pose a safety risk.

“Families in California should have serious concerns that state officials are lowering fire standards and removing an important layer of fire protection that has benefited Californians for more than 35 years,” Steve Risotto, spokesman for the North American Flame Retardant Alliance, said in a statement. The new rule “sacrifices fire safety,” he said, “with no public health gain.”

The Tribune series, “Playing With Fire,” documented how the chemical industry has repeatedly misled the public with flawed data and questionable claims about the effectiveness of flame retardants. The lead author of one government study cited by the industry told the newspaper his findings have been grossly distorted and that the amount of flame retardants used in household furniture doesn’t work.

Meanwhile, testing by Duke University chemist Heather Stapleton suggests the most commonly used flame retardant in upholstered furniture and baby products is chlorinated tris — a chemical the industry voluntarily removed from children’s pajamas in the late 1970s after scientists found that it could mutate DNA.

Furniture made under the new California rule will feature a label stating that it complies with Technical Bulletin 117-2013. But advocates advised consumers to hold retailers accountable when shopping for new furniture.

“While many manufacturers may elect to remove the chemicals, others may elect to leave them in due to concerns about liability,” said Judy Levin of the Center for Environmental Health, a nonprofit group that has found flame retardants in baby products and crib mattresses. “So consumers will definitely have to be diligent and ask specific questions.”