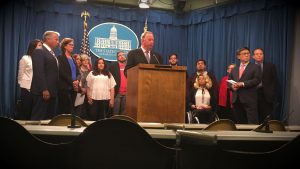 Legislative deliberations continued Tuesday over a bill that seeks to prevent financial institutions accused of defrauding their customers from pulling legal disputes out of the state court system and into private arbitration.

Senate Bill 33, introduced in December by state Sen. Bill Dodd, D-Napa, in the wake of the Wells Fargo sham account scandal, was passed out of the Senate Judiciary Committee on Tuesday.

Should it eventually be signed by the governor, the legislation would make it easier for customers who claim they were swindled by the embattled San Francisco bank to band together to file class-action lawsuits, which can often lead to bigger payouts for plaintiffs.

Individual arbitration agreements, by contrast, force consumers to resolve their disputes one at a time, and without the scrutiny provided by most public court proceedings. It’s a dynamic that critics say gives an unfair advantage to corporations, hobbling the ability of citizens to challenge deep-pocketed companies in court.