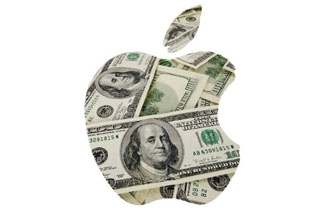 Apple was recently named one of the largest wage-stiffing corporations in the world when it comes to rewarding profitability, paying the majority of their employees poverty-level wages. While they are one of the largest corporate employers and profit-makers in the U.S., the company pays its U.S. employees only $1 for every $8 in profits. (1)

In 2011, Apple’s 327 global stores took in more money per square foot than any other U.S. retailer and worldwide, and its stores sold $16 billion in merchandise. (2) The Wall Street Journal reported that Apple garnered more profit per square foot than any other retailer in the U.S. during 2011 ($5,647), and yet the tech giant only paid retail employees an average of $11.91 per hour.  Tiffany & Company, whose sales per square foot were second in the country during 2011 at $3,085, paid their employees a much higher base hourly rate of $15.60. (2)

But most of Apple’s employees enjoy little of that wealth. A majority of its store workers in the U.S. are hourly-wage earners selling iPhones and MacBooks – about 30,000 out of 43,000 of Apple’s employees in this country – and many of them earn about $25,000 a year, or about $12 an hour. (2) This amount is just a dollar per hour above the federal poverty level.

It is already well known that Apple benefits from the extremely low wages and harsh working conditions of the Chinese workers who manufacture its products. Together with the mediocre to low pay for Apple employees (even compared with other retailers), it is clear that Apple’s success does not translate to high or rising living standards for the workers who would hope to benefit from its success. (3)

While Apple squeezes its workers to live on little, the company lavishes pay and benefits on their executives. The company paid nine of the top executives $441 million in 2011, and Chief Executive Officer Tim Cook was given a 10-year vesting stock portfolio worth approximately $570 million, based on Apple’s stock price at the time. (1)

Apple employees work in the world’s fastest growing industry for one of the most valued companies, and it is run by one of the country’s most richly compensated chief executives.

Why is it that many workers could get paid more bagging groceries?