Home • News • When will the golden Apple fall?

When will the golden Apple fall? 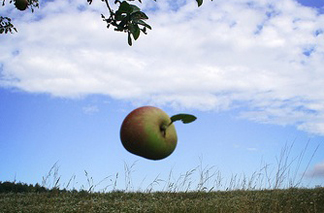 Apple Inc.’s introduction of two new iPhone models on September 10 revealed the 5C design in a variety of colors, and the 5S design is similar to the current iPhone 5, with supposed improved internals and a fingerprint sensor, and available in a gold-colored option alongside the usual black and white color choices.

While Apple impresses many of its fans by offering new products based on existing ideas or improvements on current versions, it isn’t enough to keep the public from seeing through the façade of its alluring marketing maneuvers. According to a 2013 report, Apple is no longer perceived as one of the top 10 consumer-favored brands in the United States, falling from the list in the second half of 2012.(1

Apple has suffered negative publicity due to growing consumer awareness of its inhumane sweatshop working conditions in China, its devious skirting of U.S. tax liabilities, its e-book price fixing, its opposition to consumer online privacy protections, and other scandals, all which grate against our progressive sensibilities and our sense of morals and acceptable business practices.

The company’s public relations team has worked overtime on damage control to hide the tech giant’s blatant and appalling anti-social-responsibility and anti-privacy practices. In what seems like a desperate act, Apple’s marketing team recently attempted to shift its branding strategy with a new advertising campaign, “Designed by Apple in California.” However, the 60-second commercial(2) failed on two counts.

First, it opens with the words: “This is it. This is what matters. The experience of a product.” Children are shown in school with iPads, while a voice announces the company’s product design goals. It then insinuates that we turn away from life to engage with technology, and that its products – not the lives that the products are supposed to serve – are what matter. This is quite a decided departure from past Apple ads, which focused on what its products could do to improve consumers’ lives.

Second, Apple’s commercial attempts to tug at Americans’ patriotic heartstrings with its “Designed by Apple in California” slogan, an obvious marketing scheme. Yet the ad could more accurately promote: “Designed by Apple in California, Made with Slave Labor in Sweatshops” due to the tech giant’s role in oppressing the lives of the workers who hustle to make their products, which is tantamount to slave labor.

A Bloomberg Businessweek report declared that the ads “are a flop compared with earlier ads from the maker of iPhones and iPads.”(3)

It appears Apple has some years of momentum left, and its flock of devotees seem to support and defend the company out of blind faith, despite its blatant acquiescence of worker mistreatment and rampant financial manipulations. But as unmistakable facts of its business conduct continue to emerge, consumer awareness of its less-than-stellar character has been growing.

Despite decades of brand loyalty, consumers need to make ethically conscious purchasing decisions and send Apple a clear message: “Correct your corporate behavior and eliminate your socially irresponsible actions now, or it will only be a matter of time before you fall from the tree of prosperity.”

(1)   “America falls out of love with Apple and Google.” Rhiannon Williams. The Telegraph. July 12, 2013. https://www.telegraph.co.uk/technology/news/10175670/America-falls-out-of-love-with-Apple-and-Google.html