Home • News • Why are we supporting Apple’s sweatshops?

Why are we supporting Apple’s sweatshops?

Imagine yourself working where the conditions are so bad that you would rather commit suicide by jumping off of a roof than enduring one more day of long hours without a break, grueling deadlines, and abusive management. This is the daily reality for thousands of employees who have to cope with survival in Apple’s China-based factories that make many of their gadgets. 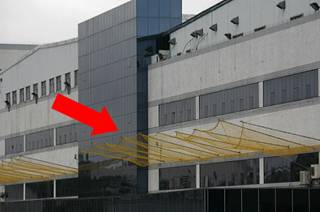 In 2010, 18 workers jumped to their death off of Apple sweatshop roofs. But instead of improving working conditions, factory owners installed suicide nets around the building to catch jumpers – so they can’t commit suicide while on the clock. (See image on right)

While many of us eagerly await Apple’s next generation iPhone or MacBook, Apple conveniently hides these reprehensible working conditions on the other side of the planet. The tech giant’s glaring and shocking lack of social responsibility plays an oppressive role in the lives of those workers who hustle to make their products. It’s tantamount to slave labor.

Suicide netting at Apple’s factories is just the tip of the iceberg. China Labor Watch has been monitoring Apple sweatshop conditions since 2000. An incident occurred in 2010 when 137 workers were injured after being forced to use a poisonous chemical to clean iPhone screens. And in 2011, two explosions within a couple of months of each other killed four and injured 77 people. (1)

The following are a few more examples of common problems in many Apple factories (1):

•    Low wages compel workers to accept overtime hours well in excess of the legal maximum. The average overtime in most factories was between 100 and 130 hours per month, and between 150 and 180 hours per month during peak production season. Since 2010 when Apple came under pressure from the Western media about these conditions, the amount of overtime was reduced to below 80 hours a month, but that number is still more than double the 36 hours of overtime allowed by Chinese law. (To put this into perspective, think of your job and how you would feel if obligated to work 20-45 hours of overtime each week.).

•    Some factories do not give workers proper overtime pay. For example, in one factory, employees working more than 80 hours of overtime in a month receive a “bonus” instead of pay (the amount of the bonus is less than the legal overtime wage). The factory uses this tactic to hide excessive overtime hours.

•    Work intensity is very high. In nine factories, workers generally work 11 hours every day, including weekends and holidays in peak seasons. They can only take a day off every month, and they may need to work for several months without a day off in the peak seasons. In 2006, an assembly line of 150 workers was supposed to put together more than 2000 computers a day. That number grew to over 3500 computers a day by 2011.

•    Workers are exposed to dangerous working conditions. For example, some workers reported that their work area was poorly ventilated and that the air was dense with metal dust.

•    Some factories do not pay for workers’ work injury insurance and other insurances as required by law.

Recently Apple boasted that the factories making their products have cleaned up their act and achieved 99% compliance with Apple’s 60-hour work week rule (3), even though the legal work week limit in China is 49 hours. However, China Labor Watch documented work weeks of 66, 67, and 69 hours at three factories. Workers at a Shanghai factory told investigators they were “forced to sign forms indicating that their overtime hours were less than actual levels.”(2)

According to CNET, Apple said in a 2012 statement: “Apple is committed to the highest standards of social responsibility across our worldwide supply chain…We insist that all of our suppliers provide safe working conditions, treat workers with dignity and respect, and use environmentally responsible manufacturing processes wherever our products are made.” (4)

This media window dressing appeases Western shareholders but rings hollow when the disparaging realities and abusive, insufferable working condition remain widespread and continue unabated. Even so, the truth is that the factories that make Apple products continue to oppress workers. Undercover investigators sent into one factory recorded at least 86 labor rights violations, which include hiring discrimination, women’s rights violations, underage labor, and poor working and living conditions (2).

The question still remains: When will Apple, a $415 billion company, create real change and be socially responsible?

If they took significant steps to work on improving worker conditions and to share costs and responsibilities with factories that produce Apple products, it would be more viable than their historical approach of promising change until attention turns elsewhere, without delivering results.

Until Apple implements change, as consumers, we are supporting these deplorable Apple sweatshops every time we purchase and use an Apple product.